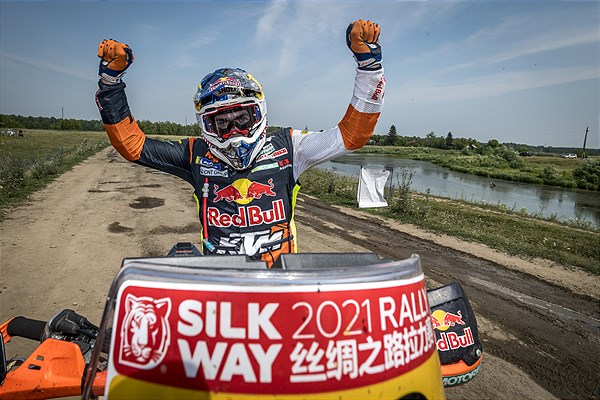 Red Bull KTM Factory Racing’s Matthias Walkner has won the Silk Way Rally. Placing second on the fifth and final stage, Walkner extended his lead at the top of the timesheets to claim the race victory and finish over six minutes ahead of his nearest rival

Round two of the 2021 FIM Cross-Country Rallies World Championship was unfortunately cut short midway through the event due to the pandemic situation in Mongolia. Reduced to five stages, with riders repeating previously contested specials on the final two days, the race still delivered a sizeable challenge due to the mixed terrain encountered.

Tuesday’s stage five was a re-run of the second day of the event. Although the special totaled 132km, times were taken from the 110km mark, presenting riders with an effective sprint finish to the event. First into the stage and enjoying a near five-minute advantage over the second-placed rider, Matthias Walkner still pushed hard through the tight forest tracks. With navigation less of a factor on the timed special, the experienced Austrian was able to maintain a fast, but safe pace over the demanding terrain. In doing so he finished the day as runner-up and increased his lead in the final event standings to six minutes and 20 seconds.

Combined with his second-place finish at round one of the FIM Cross-Country Rallies World Championship – Rally Kazakhstan – Walkner moves into the lead of the series standings with a 21.5-point advantage over the second-placed rider.

Matthias Walkner: “The final stage here was really nice to ride. It was the same as day two, but instead of making it rougher, it seems the cars and trucks prepared it quite well for us today. I really tried to push at the beginning, because I know the first part of the stage is good for me over the fast pistes. In the forest I thought I might have to ease off a little, but it rode better today, and I was able to push for the whole stage. It’s a shame the rally had to be shortened, but the organizers did a great job of giving us a full event to race. To win the famous tiger trophy here at the Silk Way feels amazing, and with my win here I’m now also leading the championship. I couldn’t have asked for a better result really.”

Jordi Viladoms – KTM Rally Team Manager: “I’m really happy to return to the top step of a rally podium. It’s a great reward to Matthias and the whole team who have worked really hard for this. The bike has been perfect and performed really well on all the different terrain we saw here at the Silk Way Rally. Matthias is leading the championship now with a good advantage at the top, so we’ll try to keep this winning momentum going for the remaining rounds of the series.”

Red Bull KTM Factory Racing will next be in action at the Rallye du Maroc, in Morocco, from October 8-13.