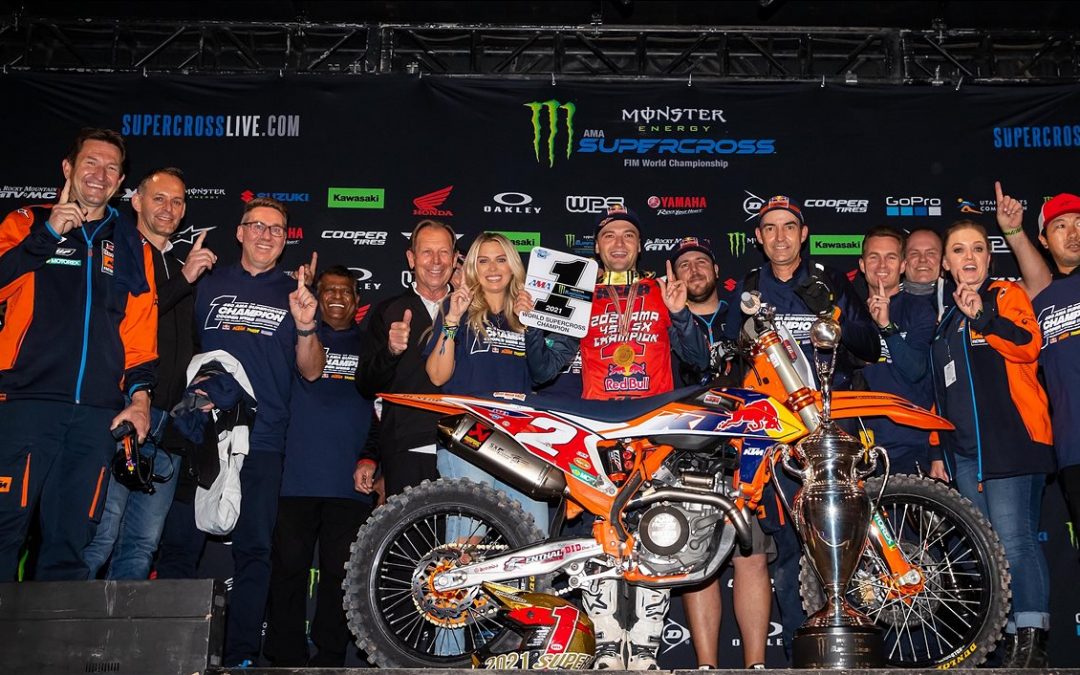 SALT LAKE CITY, Utah – Red Bull KTM Factory Racing’s Cooper Webb had an incredible conclusion to the 2021 AMA Supercross Championship, clinching his second-career 450SX title with a dominant victory at Saturday’s season finale. Marvin Musquin furthered the remarkable night for the team as he delivered a strong runner-up performance to give Red Bull KTM back-to-back 1-2 sweeps in Salt Lake City, Utah.
Widely recognized for his grit and determination to win, Webb has overcome his share of adversity since earning his first 450SX title in 2019. As the 2020 runner-up in supercross, Webb missed most of the AMA Pro Motocross Championship due to a back injury and he even had a rocky start to 2021 with a ninth-place finish at the opening round. However, in true champion’s form Webb spent the early part of the season chipping away at the points gap, setting himself up for a massive comeback in the second half of the series. He entered the final round with a comfortable 22-point advantage over Ken Roczen but that didn’t stop him from pressing the envelope when it came time for the gate to drop at Rice-Eccles Stadium.
With a second-place finish in 450SX Heat 2, the newly crowned champion shot off the line aboard his KTM 450 SX-F FACTORY EDITION, positioning himself into second early on. He pressured Roczen heavily through the first five laps before losing a spot to third early on. He didn’t let up though, eventually overtaking Roczen, and then Chase Sexton, to move into the lead with seven laps to go. From there, he marched to the checkers scoring his eighth Main Event victory of the season. 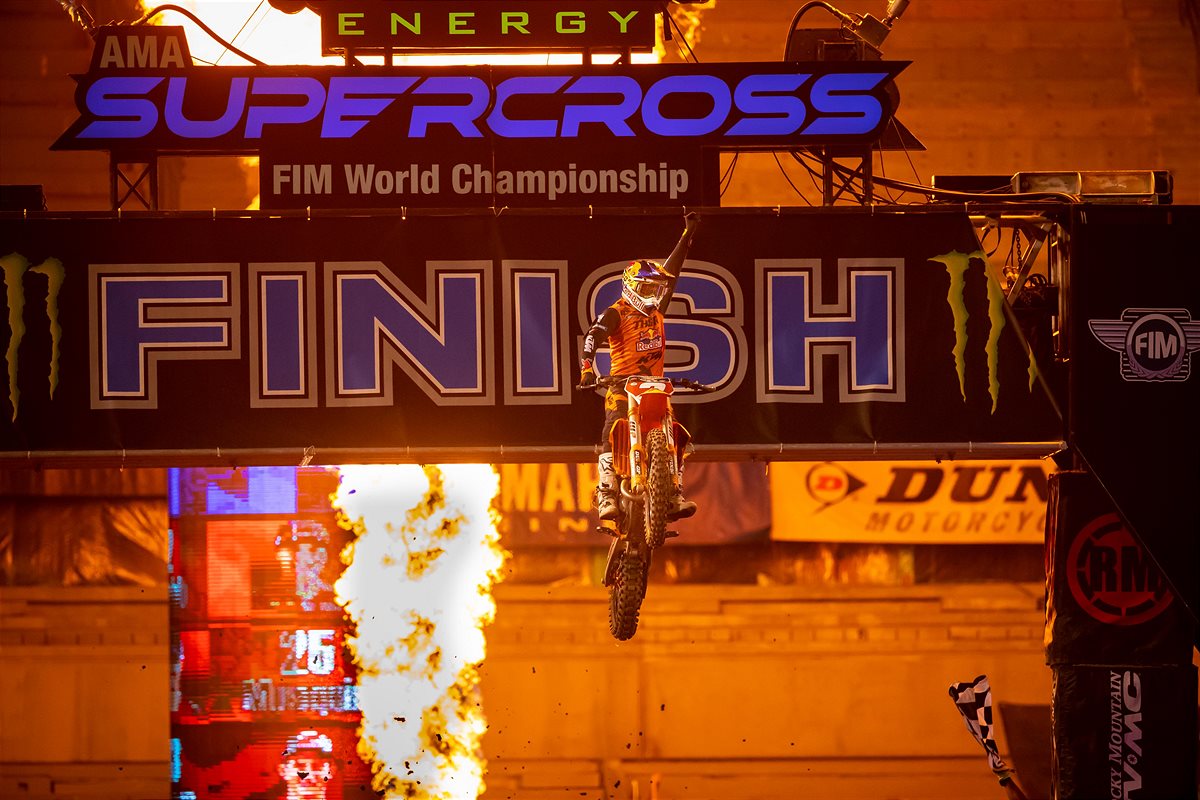 Cooper Webb: “It’s been a heck of a year with everything in the world going on but we dug deep this year and stayed the course. It’s been an incredible journey, a hard fought season with a lot of hard races but this is all worth it right here. Being a two-time champion is incredible and to get the win tonight is the cherry on top. I’m speechless, this is incredible.” 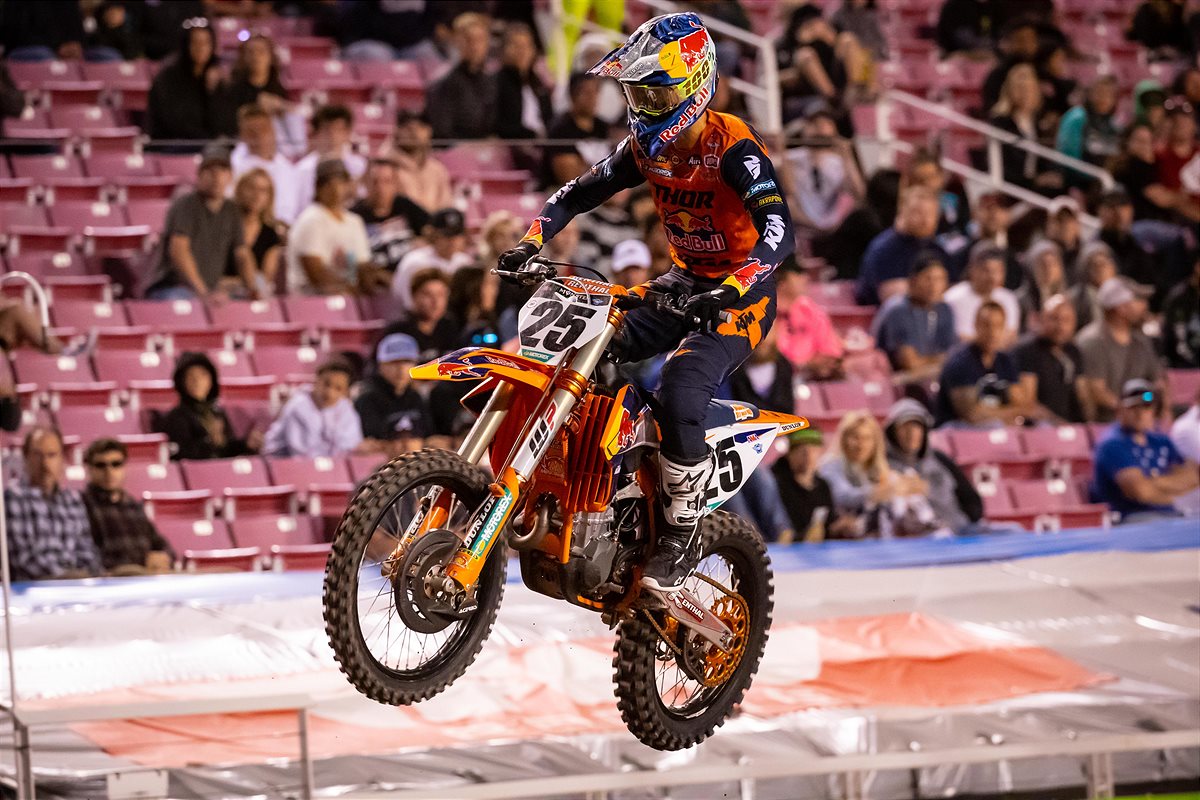 Ian Harrison – Red Bull KTM Team Manager: “This season I think was Cooper’s strongest season – he got his most wins and the competition was really stiff from Honda and Kawasaki but he just fought his way through there. What a fighter, he was exceptionally strong at the end of all the races and he put up a battle with so many guys on the last lap and came out victorious many times. Once we got to Round 4, he really found his groove and then he took command of the points lead around the middle mark of the season and there was no looking back. It was truly an amazing season and it was awesome to be a part of it. Our team, everybody involved, they all did exactly what they needed to and more and we delivered, so I’m super happy.”
Roger De Coster – Director of Motorsports, North America: “There have been many great champions over the years but when it comes to race craft and the really deep desire to win, Cooper is special and he ranks at the very top. Even when it was not necessary to win today – he could have just rode around and 18th would have been sufficient – but he decided he wanted to win the race and it was very impressive how he ended the season. The guy has so much heart, he keeps impressing me time after time and I’m really thankful for that. 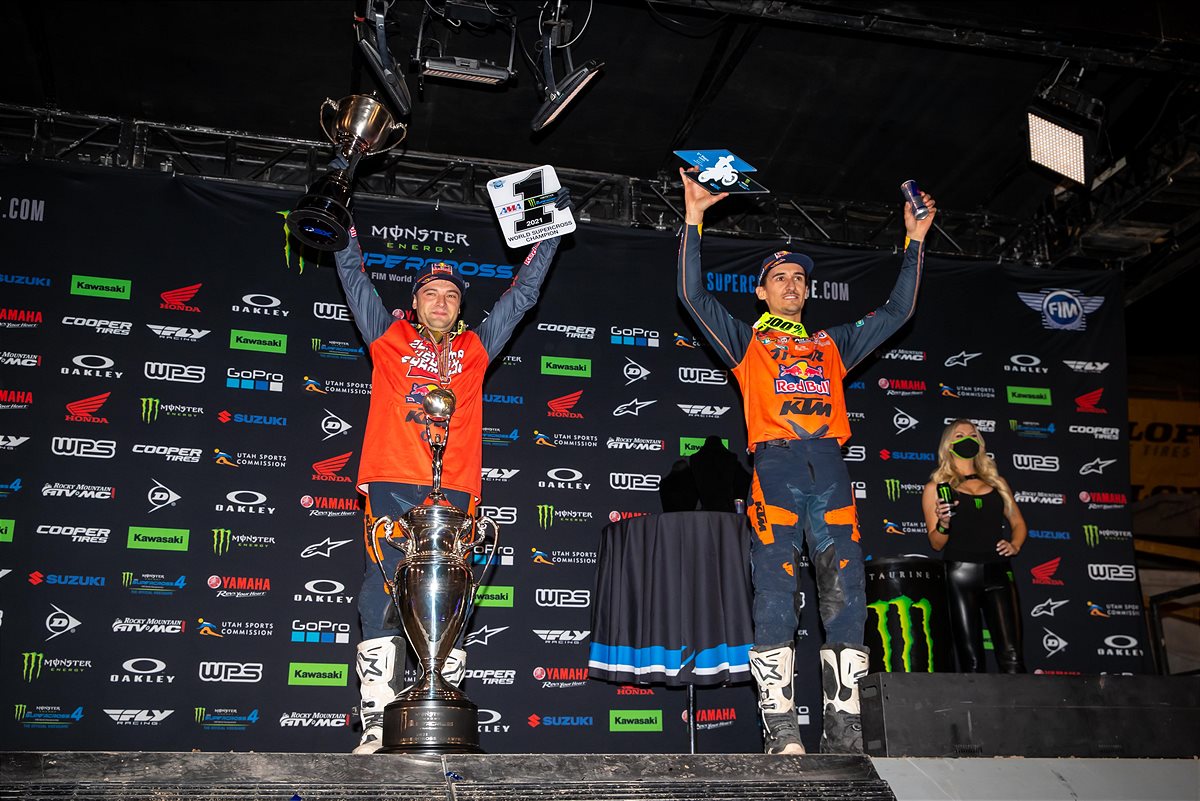 I’m also thankful for the people that make this possible because of course the rider is the biggest factor in this sport by a long margin but there are a lot of people that make this possible also that have influence and make a difference in getting there. Especially the people in Austria, also Slovenia with Akrapovic and then all the people in the U.S. like WP suspension, Carlos and so many other people that have something to do with this championship. I’m just thankful to still be a part of it and witness this awesome racing.” 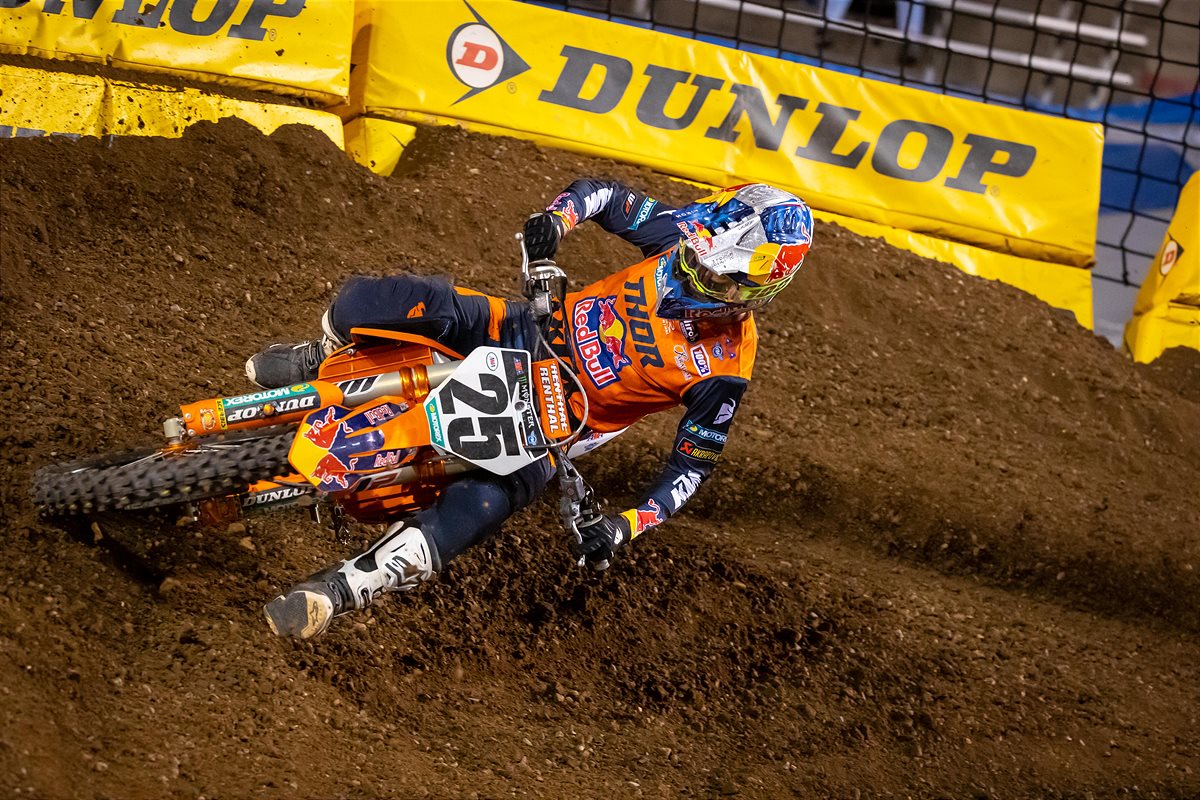 Coming off a big win last round, Musquin stepped into stride as the gate dropped for 450SX Heat 1 and he powered his KTM 450 SX-F FACTORY EDITION into second on the opening lap. He diced back-and-forth with the front-runners throughout the race, ultimately finishing fourth in the heat. He secured a great start for the Main Event, claiming the holeshot and battling up front in the opening laps. With the top five riders in a freight-train formation, Musquin maintained a steady position in fourth for most of the race before charging into podium contention late in the race. Sitting third going into the final two laps, Musquin dug deep and pushed his way into second where he finished strong at the finale.
Musquin: “I’m happy to finish this season on a very high note, going 1-2 in Salt Lake City. The chase was really fast and we are super high in altitude so the breathing was tough, but it felt so good to give my best like that. I’m really happy to give good results right now because it’s been a tough season but I’m showing that I’ve still got some speed and endurance. I’m excited, we’ll be back next year!” 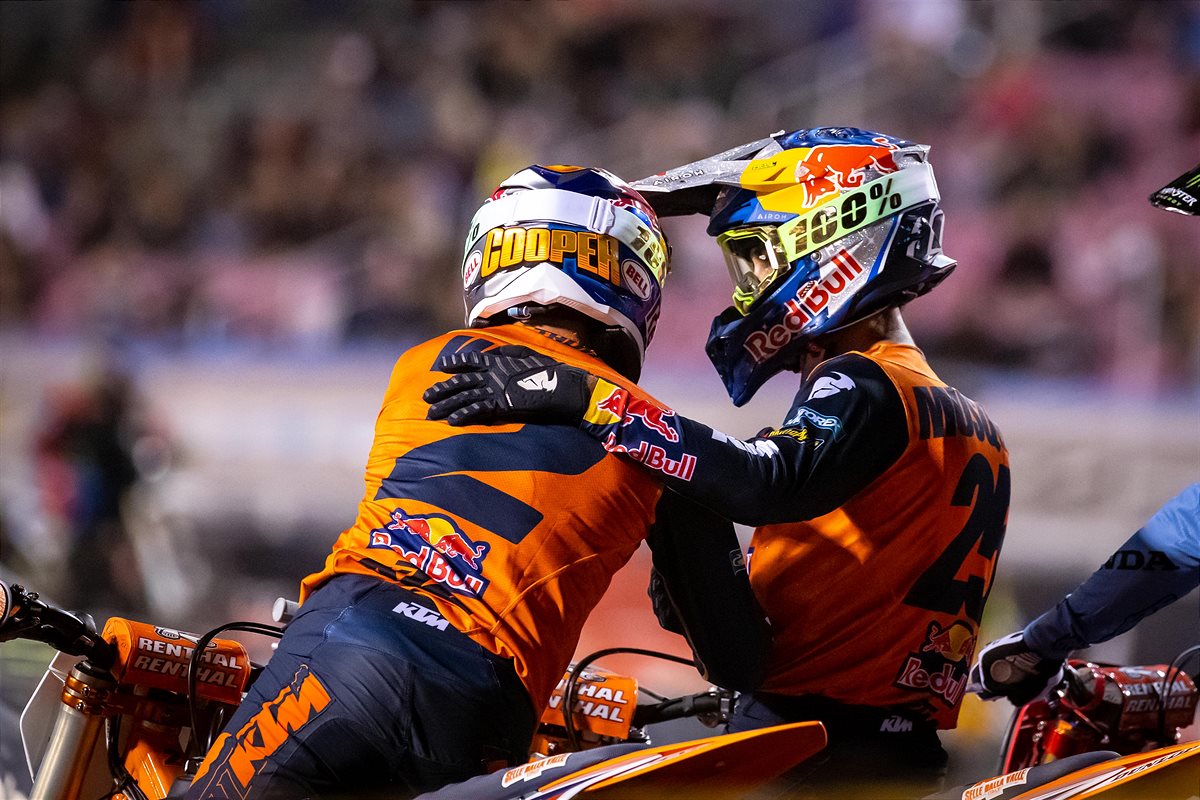